On to a new chapter today- I started work on the flap torque arm.

The kit comes with a handy layout template for assembling the torque arms at the correct angle to the actuator arm. You bolt the end arm to the template and slide the tube into the hub of the center assembly, measure out the proper width and then drill the mating holes. 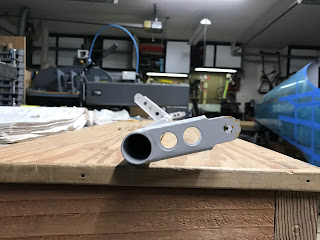 The assembly is now drilled and ready for priming. 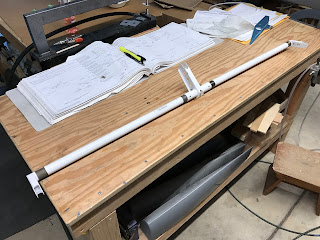 I finished up today installing the guide blocks where the rudder cables exit the central tunnel. The plans mention that the parts were included in the empennage kit. I rummaged for a couple hours through the left over parts from the empennage kit and could only find the small end pieces. The larger blocks with the groove were nowhere to be found. After tearing the garage apart I had the thought to check the fuselage kit materials list and discovered that the blocks were included in one of the bags of parts for the fuselage kit, not the empennage kit. Another instance of why it takes so long to build an airplane- there are thousands of small parts and finding them can often take hours... 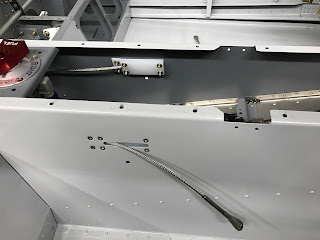