Some of the places I've flown to have inclined parking and often there is a lot of wind when I land at airports away from home. In my Mooney I would simply put on the parking brake until I could hop out and apply chocks to the wheels. Van's does not include a parking brake as part of the standard design for the RV14. I've spent the last couple of weeks noodling out how to install a parking brake and came up with this design: 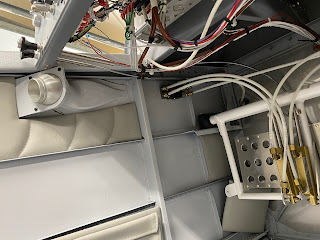 I added a push/pull cable to the left of the cabin heat on the pilot's side of the control panel. 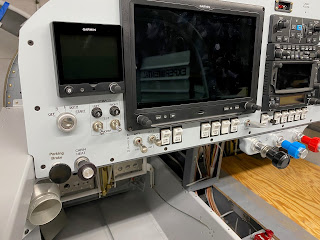 And I installed a Matco PVPV-D brake valve on the side skin of the fuselage. When you activate this valve, it retains the pressure between the valve and the brakes. If you apply braking using your toes and then throw the valve, it will lock the brakes until the valve is released.

Here are the parts I purchased: 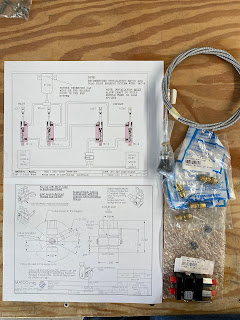 I quickly discovered that the straight hose fittings would not work. The nylon brake tubing will not bend sufficiently to allow attaching straight into the valve. So I ordered 90 degree elbows. I also sourced a cable connector from Aircraft Spruce that would fit on the arm of the brake valve. Here are the parts: 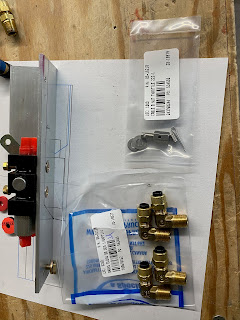 Originally I was going to attach the valve to the longeron that supports the rudder pedal cross tubing, but I ran into trouble routing both the push/pull cable and the brake line connections. A friend who built a 14A attached the valve on the center sub panel support, but for the tail dragger version that is not convenient because the brake lines run to the firewall. I eventually determined the best mounting spot is on the fuselage side skin in line with the control panel bottom so the control cable has a straight shot to the brake arm and also the brake lines can be routed to be out of the way of feet on the rudder pedals.

I drilled 4 holes through the side skin and dimpled them for the mounting screws. 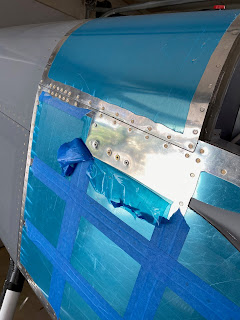 If I had known these holes were needed before assembling the fuselage it would have been a simple matter to dimple them. To dimple them after the fuselage was completed required a different approach. I drilled a hole in a bucking bar so I could insert a dimple die and I took the die holder out of my c-frame and mounted it in my rivet gun. 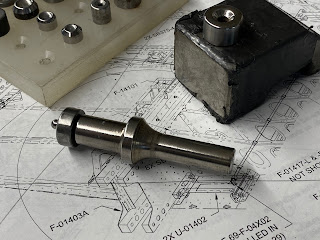 I was able to enlist Deb because this was a 2 person job- my arms are not long enough. A few taps on the rivet gun with me holding the bucking bar / female die on the other side was sufficient to form the dimples. Thanks Deb! 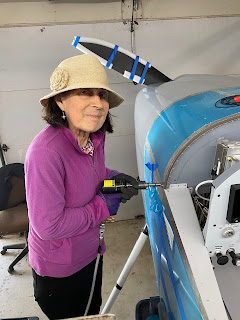 The cable end I used required washers and a cotter pin to hold it in place. I had to insert several washers to get a good fit and I ended up grinding one of the washers a little thinner to get a really tight fit with no wobble. 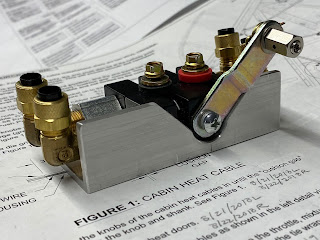 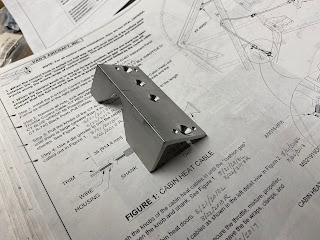 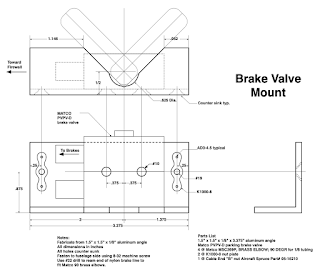 I had to fabricate a new line going to the right brake because it was too short to reach. I had hoped to be able to remove the nuts and ferrels from the lines I had already installed, but they were too tight to pull off the nylon tubing without destroying them so I had to order new ones from Vans. I fabricated a new line from the right firewall attachment to the brake valve that is 2 inches longer than the original line. I cut down the length of the line coming from the left firewall connection to fit and fabricated 2 new lines going from the rudder pedals to the brake valve.

I used the nylon brake line tubing provided by Van's. To make a connection to the Matco 90 degree brass elbows you must push the tubing onto a barb and seat the end of tubing all the way into the well of the brass elbow. When I just ran the bit into the end of the nylon tubing I could not keep the reamed out area concentric with the outside of the tube and then could not force the tubing all the way into the well on the elbow. To keep the drill bit centered on the tubing and to keep the tubing round while drilling, I fabricated an alignment jig out of 2 pieces of 1/4 thick aluminum bar with a 1/4 inch hole on one side and the #22 dill hole size on the other. 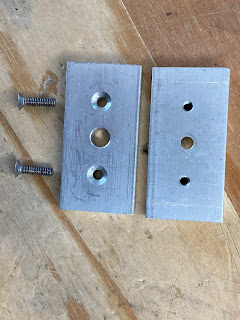 I drilled and tapped 2 screw holes to hold the pieces together. 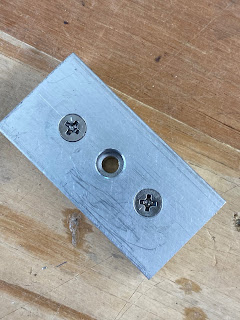 To ream out the tubing end, I insert the nylon tubing into the 1/4 inch hole side and then drill from the opposite side. 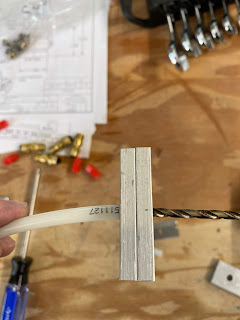 The tubing end must be cut square so that it will properly seat at the bottom of the well in the 90 elbow. I drilled a 1/4 inch hole in another piece of 1/4 aluminum bar and used that for trimming the ends of the tubing using a razor blade. 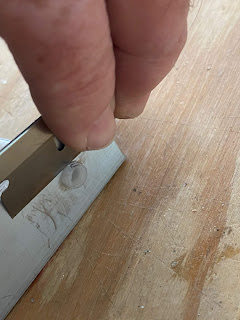 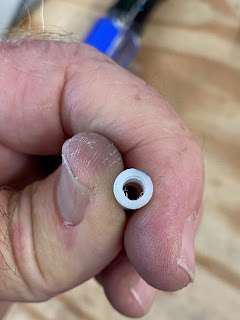 The adel clamps arrived from Aircraft Spruce and I installed the new oil breather tubing. The new tubing replaces the 90 rubber elbow and aluminum tubing that came with the firewall forward kit. The new tubing routes around the oil filter and clamps to the firewall using the screw holes already in place for the previous tubing. I had to replace the previous adel clamps with larger ones to accommodate the new rubber tubing. 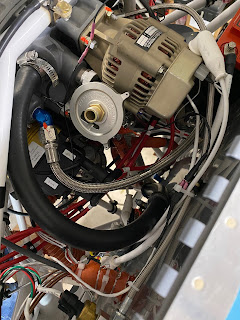 Here is the view from the bottom looking up. I used the end of the old aluminum tubing in the end of the rubber tubing. The end of the aluminum extension directs the output to the top of the exhaust which may prevent some the oil from accumulating on the belly of the fuselage? 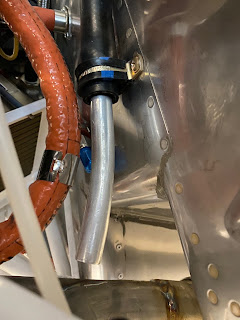 Space in the engine compartment is limited for reaching the adel clamp screws with a screwdriver. The screws go into nut plates so a lot of force is required to screw them in. Necessity is the mother of invention and I came up with this method for driving the screws: 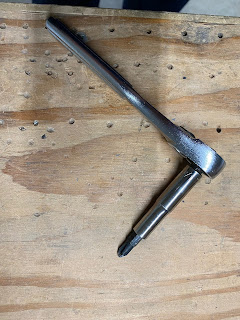 Socket wrench, 1/4 in socket, philips head insert- fits in the limited space available and provides enough leverage to screw into the nut plates.
Posted by Smash at 10:26 AM No comments:

I installed a dome light at the back of the luggage storage area. This light is on the map light circuit and is controlled by a dimmer on the control panel. The light is locally grounded to the airframe and the power line comes from the dimmer circuit board in the panel. I discovered I had missed riveting the center 3 rivets in canopy top brace so I tackled that first. 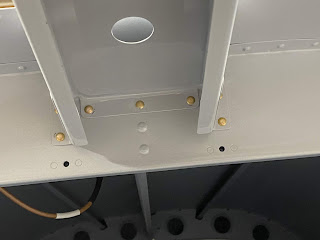 Then I created a support plate and attached the light with 2 screws. I also drilled a wiring hole in the fuselage bulkhead and inserted a through hole plastic insert. The support plate attaches to the canopy brace using 2 more screws with lock nuts. The light is slightly tilted forward so the light nicely illuminates the baggage area. I may build a shade to limit the LED glare to just illuminating the baggage floor. 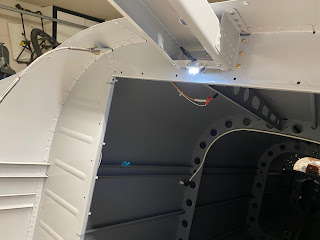 I have not had any success closing the cowling since I added the rubber baffling. I could not get the upper and lower cowling halves to join. Some of my friends advised putting heavy sand bags on top of the cowl to force it closed, but I don't think that is the problem. Today I spent some time investigating what was causing the gap and discovered that the baffling on the upper side of the air inlets was getting stuck on the epoxy/flox dam build up on the upper cowl. I got out the dremel with a sanding drum and whittled back the dams. 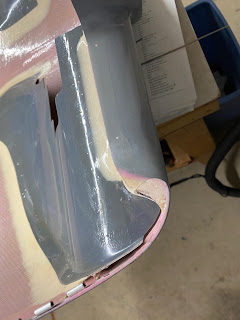 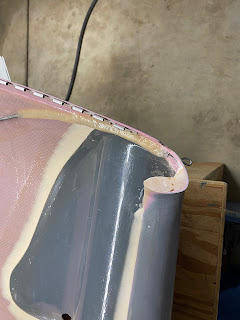 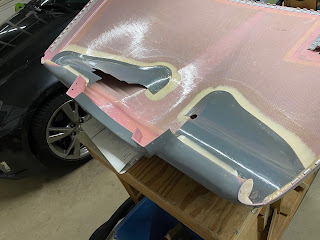 The rubber gasket now smoothly fits inside the inlet side and it is easy to close the cowl halves! Through trial and error I have now discovered an order for attaching the cowl halves that works. First install the lower cowl. Then place the upper cowl on the fuselage. Match up the piano hinge along the top fuselage then make sure the rubber gaskets are in place around the air inlets at the front. Then press down and match up the piano hinge along the lower edge of the cowl. Push the piano hinge pins in from the front to join the lower and upper halves. Finally, insert the cowl to fuselage piano hinge pins through the oil door. 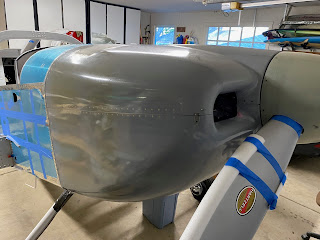