I threaded the rudder cables from the tail cone forward under the baggage floor and then up to the rudder pedals. A polyethylene sheath on the cables must be fastened to the side of the tunnel to prevent the cable from rubbing on the carry though spar. Four cushioned clamps are provided which are held on by a bolt and nut through the tunnel wall. 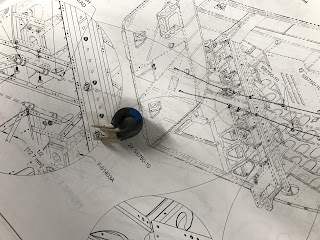 Here's one of the clamps positioned on the sheath next to the tunnel wall. I was able to insert the bolt through the clamp and tunnel wall but then I could not get the nut on the end of the bolt because there is not enough space to fit my fingers in. After dropping the nut way too many times and spending a lot of time searching for the nut, I called in Deb to try- she has much smaller hands. She gave up after 20 minutes of trying. I knocked off and went to lunch to think it over... 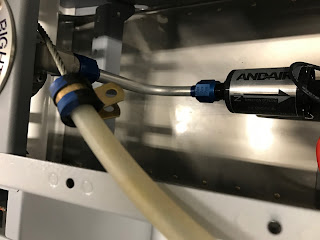 After lunch I came up with the idea of using a small strip of masking tape wrapped around the nut to wedge it securely into the end of my wrench. 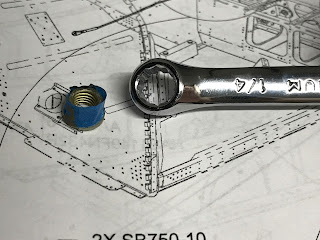 I was then able to maneuver the wrench into position to thread the nut onto the bolt. 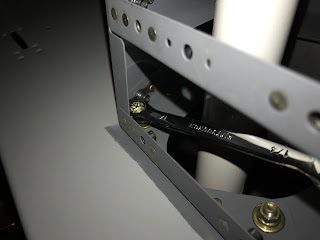 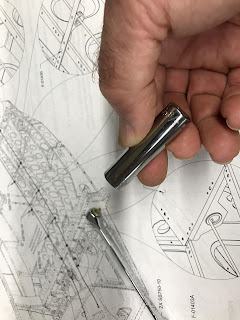 You can just make out the 2 bolts with nuts installed in the middle of this picture. There is just no accounting for how long a job like this will take. I looked at the plans this morning and though it would be a 30 minute job- but it ended up taking 4+ hours. And people wonder why it takes years to complete a homebuilt airplane... 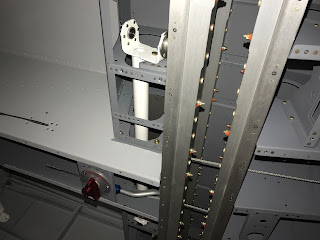