After a couple false starts over the last couple days I successfully pressure tested my tanks. Initially I had a major leak at the air valve and hose assembly used for pumping air into the right tank. After tightening down the hose clamps I was able to get the balloon to inflate and stay inflated. I sprayed down all the seams and rivets on the tank with soapy water and was not able to see any leaks. The balloon held for 5 hours until a humming bird flew up to it and popped it! 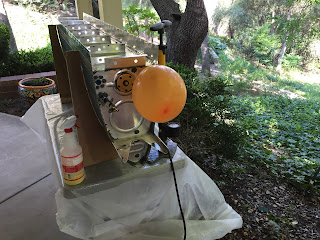 I got in a rush and immediately started testing the left tank without any success. Then I remembered I hadn't applied thread sealant or torqued down the drain sump, fuel strainer or the return line plug. I took care of that and pumped up the tank only to remember I hadn't taped over the gas cap. It took me 2 tries to get the gas cap sealed up with tape. The green balloon is now staying inflated. I'll check it again in the morning. Hopefully the humming bird won't be attracted to a green balloon. 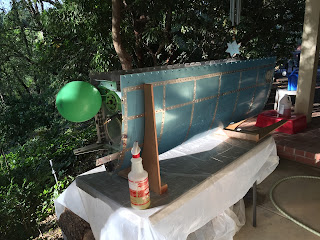 Between testing the tanks, I did the prep work on the aileron and flap gap seal pieces. Van's just issued a SB for cracking around the inboard aileron support bracket. I've already riveted everything in place and the SB advises not redoing it unless a crack later developes. I did trim the corner of the aileron gap seal per the SB to make inspection easier. 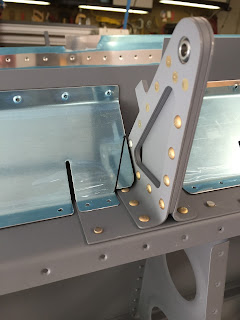 I spent a large part of the afternoon attaching the right tank to the wing. Lots of bolts and screws. I found the drag friction on the z-flange attach point AN3 bolts was about 18 in# so I torqued them to the recommended 20-25 in# plus the 18 in# of drag for a total of 43 in#. 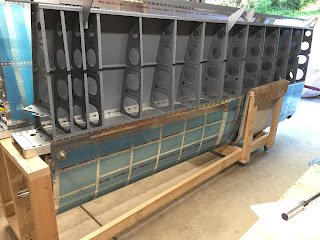