I can honestly say that I am enjoying building the RV-14, however, some tasks are more fun than others. For instance, I don't look forward to the whole parts prep and priming process. Another task I find less enjoyable is counter sinking the trailing edges. I was thinking about this last night and two things occurred to me:

2) Maybe I could improve the counter sinking process.

So this morning I spent some time on the drill press setup. I still used the angled backing block to hold the wedge flat, but I added a piece of 2" x 2" aluminum angle to accurately hold the edge of the wedge. The aluminum angle also provides a flat surface to the side of the wedge which gives better support for the counter sink cage for more accurate depth control. The other little innovation I added today was to pencil in the large lightening holes on the wood block. The pencil marks made it much easier to advance the T.E. wedge to the next hole- all I had to do was align the lightening holes with the penciled marks. 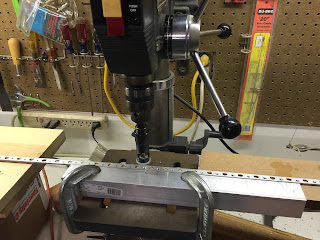 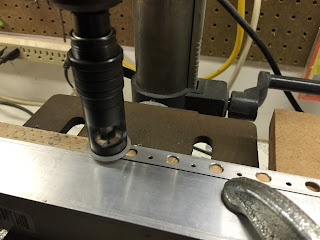 The aluminum angle also nicely supported the countersink cage when I got to the end of the strip. You can see the penciled in hole outlines on the wood block on the left. 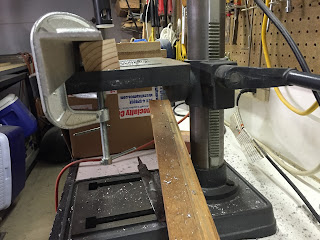 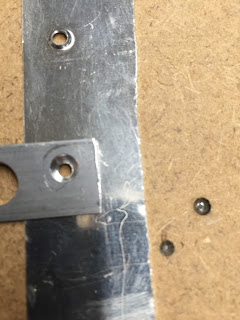 If you click on this picture you will see the dimpled skin fits flush in the counter sink. 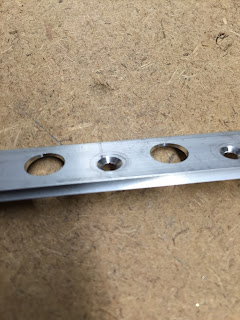 The counter sinks from top and bottom meet in a knife edge.

On previous counter sinking sessions I had had problems with holes elongating when I did the back side. This is because when the backside countersink cuts in, there is not much material left to hold the guide pin in the hole. With the setup I used today, the aluminum bar held everything accurately in place so the counter sink could not wonder off. I didn't get any elongated holes today! 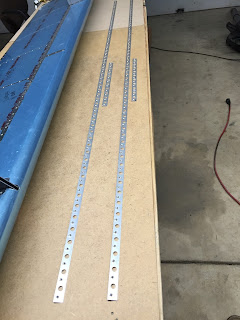 The manual specifies that the trailing edge wedges be glued in before riveting. The instructions generally specify that you clean the surfaces before bonding. I've been using the double sided bonding tape 3M F9460PC VHB for the trailing edges with mixed success. I did a little research last night and found the spec sheet for the bonding tape here: http://multimedia.3m.com/mws/media/326683O/vhbtm-adhesive-transfer-tapes-f9460pc-f9469pc-f9473pc.pdf

Pretty impressive stuff. It can develop 690 kPA (100 lb/in²) of normal tensile strength in aluminum bonding applications. It is impervious to splashes of gasoline and JP4 and works up to 500° F. I guess if I ever end up upside down on fire in the weeds I won't have to worry about the trailing edge coming unglued. :p

The spec sheet also says the tape has a shelf life of 18 months and is best applied between 70° and 100°. It is not recommended to be applied when temps are 50° or lower. I checked my tape and it is less than 18 months old. The temps in the garage are marginal- it was 62° this afternoon, so I turned the space heater on high and hoped for the best. As far as I can tell, the bonding should occur fairly rapidly after mating the bonding surfaces. The spec sheet did not specify a cure process or time for developing maximum strength. All it specifies is that the bond strength is dependent upon the amount of adhesive-to-surface contact and that firm application pressure helps develop better adhesive contact and improves the bond. Well- the trailing edge has all these holes so bonding surface area is not optimal. I already made sure the dimples would fit so the mating should be optimal for the bonding area that is available. Now I just have to make sure I get the skins clamped with enough pressure to maximize the bond. If the clecos don't do it, the rivets will. 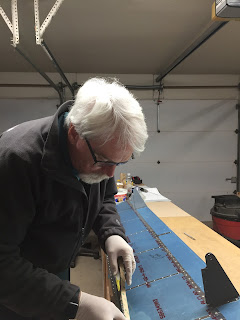 I carefully removed the paper backing from one side. If you pull the paper off too fast, it will rip the adhesive when you get over the lightening holes,  so I went slow and made sure the adhesive stayed attached to the wedge. 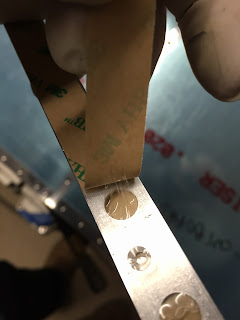 Here you can see the adhesive sticking to the paper.

I then inserted the wedge in the flap and pressed it into alignment with the dimples in the skin. After it was properly aligned, I then pulled the tape off the other side of the wedge and clecoed the trailing edge to my 2" x 2" aluminum straight edge guide. The manual says to weight down the flap on a flat surface. I started out with weights, but they got in the way of the clecos. The flap was already lying nice and flat on the table so I removed the weights because I was a little worried about oil canning the skins between the ribs. 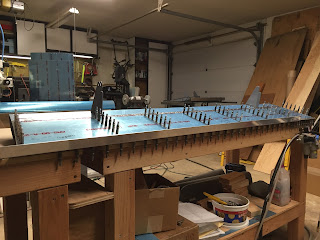 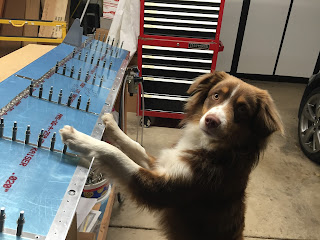 Chief inspector Woody gave the assembly a paws up and we called it a day!