I got back to riveting today. Nice change from P&P (prep and paint). Here's the seat belt attachment lugs. These few rivets are what will keep me in my seat in turbulence and acro flight (or other sudden delta v situations)! 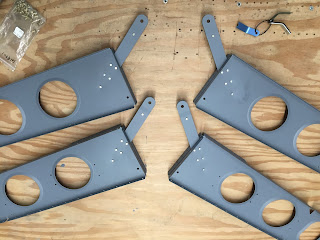 The idler brackets require a 45 degree bend after you rivet in the nut plates. I used my duck bill pliers for this job. I drew a pencil line 1/4" in from the edge to guide placement of the pliers and made multiple passes to gradually bend the flange to the final set. 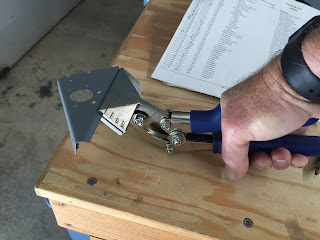 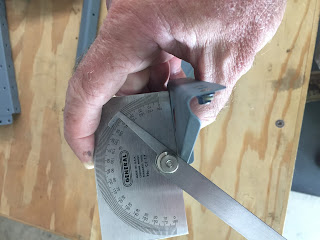 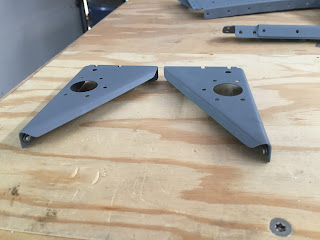 The bearing for the idler bracket needs to be trimmed so it doesn't protrude. I built a simple holder out of some scrap MDF board. First I layed out a center. 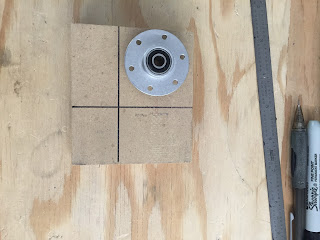 Then I drilled a hole with a 3/4" wood spade bit. I inserted the bearing, traced around it with a pencil and then layed out the trim line. 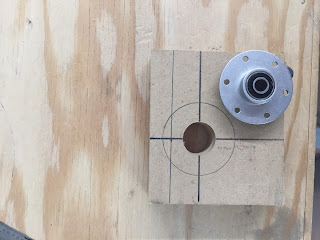 I pinned the bearing to the holder using a cleco and then ran the assembly through my bandsaw. The drawing in the manual shows the trim line running just below the top hole, my line ended up a little short of trimming off the top hole, so I adjusted the fence in a little and made a second pass to clean up the edge just even with the top hole. 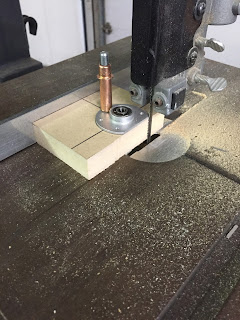 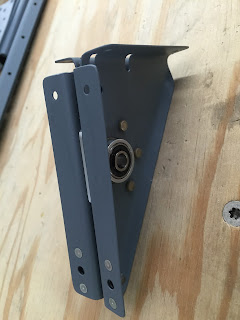 I used the rivet gun to set the rivets for attaching the idler bracket to the bulkhead. 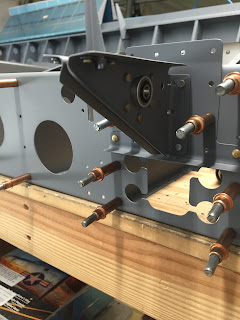 I back riveted doublers and some stiffeners to the fuselage bottom skin. The plans called out for some
AN460AD4-4.5 length rivets but none that length were included in the kit, so I used some 5 length rivets. It was a little difficult getting them to shoot without leaning over, but after a couple retries I adjusted the air pressure and got ok results.

The last project for the day was assembling the gear brace assembly and seat rib angles. The angles are supposed to be 90 degrees to the brace. You partially set the upper rivet, adjust the angle and then clamp and shoot the other rivets. I initially used a cleco for clamping, but the angle moved when I squeezed the rivet. I drilled out the rivet, reset the alignment and then clamped using a cleco clamp and was then able to squeeze the rivets without the angle moving. 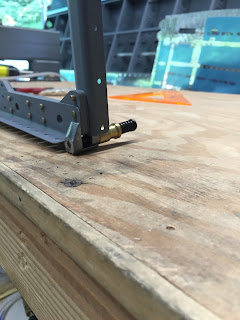