It still hadn't warmed above freezing in the garage after the order session so I watched the tutorial on crimping molex mini pins on SteinAir's web site and added connectors to the aileron trim servo. Thank you SteinAir! The mini pins are very difficult for my old eyes to focus on - I'll have to get one of those big magnifying glasses if I have to do very many more of these :-( 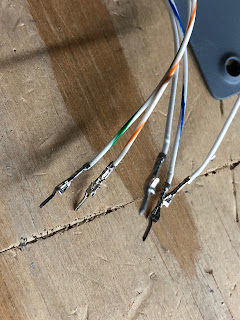 I've been trying to get as much finished in the interior of the wings as possible before riveting the bottom skins. I could probably do a lot of tasks by reaching in through the access holes, but it is MUCH easier with the skins off. I'm now waiting for parts to arrive from Amazon and Aircraft Spruce and hopefully I'll be done with interior work by the end of next week.

This afternoon I trimmed the left wing tip and fitted it to the wing. The first step was to bolt the rigging template to the end of the aileron to hold it in the neutral position. I fabricated a half washer and added a couple spacing washers to space the template from the end of the wing before tightening the nut. Then I used masking tape to hold the template on the aileron.

It took 3 or 4 trim, mount, mark and re-trim sessions to get an acceptable fit. I used a strap to apply (gentle) pressure to force the wing tip into the leading edge of the wing. I also used duck tape to help pull the tip flush into the end of wing.

The fiberglass is very flexible and is easy to coerce into shape. I had read several blogs where the builders had to split the trailing edge of the tip to get it to line up with the aileron trailing edge. I discovered that depending on how you pull the lower and upper edges of the tip into the wing skins you can cause the trailing edge to move several inches up or down. 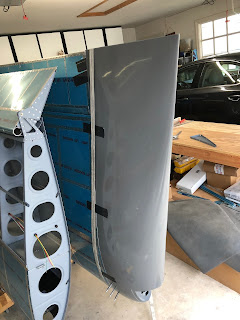 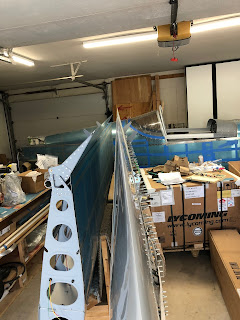 Finally I drilled #40 the mounting holes starting from the leading edge working aft, alternating between the upper and lower skin. I frequently checked the tip trailing edge alignment as I drilled and clecoed the holes. The alignment ended up spot on by the time I finished drilling and clecoing. 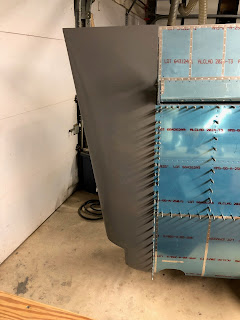