Today I shot the top coat on the floor cover panels. I used my new DeVilbiss spray gun and Stewart Systems EkoCrylic Dawn Patrol Gray epoxy paint. In the last couple days I watched the YouTube videos on how to prep and shoot this painting system https://www.youtube.com/playlist?list=PLA25476026D68521C

I had already primed the parts using EkoPrime epoxy primer so today I scuffed the parts using Scotch Brite maroon pads and then blew the parts off with compressed air, followed by a wipe down with a lint free rag soaked with rubbing alcohol. I set the air pressure to the recommended setting of 20-22 psi and layed down 2 fog coats separated by 10 minutes and then applied a wet coat. 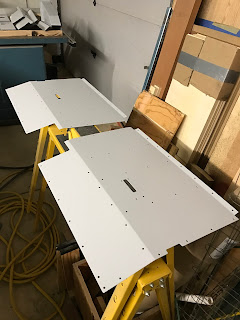 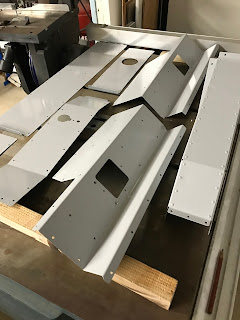 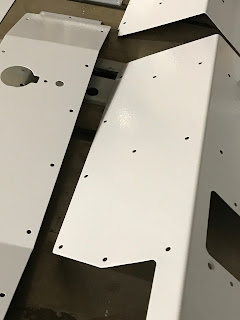 I had problems getting good atomization for the fog coat spray. I ended up with rather large droplets and I'm not sure if it is a viscosity problem or air pressure/spray gun adjustment problem. Also, since the epoxy paint uses water for thinning, it tends to bead up on the the parts rather than flow out. In revisiting the videos, I discovered that they sparingly used 90% alcohol for the final rub down. I used 70% rubbing alcohol rather generously so that may have caused some of my wet out problems.

I weighed out the resin on my gram scale. The instructions specify that you divide the weight of the resin by 3.3 to compute the amount of catalyst and divide by 3 for the water. I added the catalyst and carefully mixed them together and then added the water. I may not have waited long enough for catalytic induction before adding the water. The video recommends 10 minutes. I'll have to double check that next time. I didn't have a viscosity cup so I'm not sure what viscosity my catalyzed and thinned mixture came out to.

If you don't get the fog coat even, the wet coat does not flow evenly. I ended up with quite a bit of orange peel on the finished parts. I like that the epoxy paint seems very tough and has a nice high sheen finish, but I will have to learn how to apply it with a smoother finish. I'll try color sanding the parts I just shot, but that is a lot of work...
Posted by Smash at 5:46 PM