Frustrating day. I worked on aligning the rudder and setting the throw limits. When the rudder is at full throw and hitting the stops, it is supposed to clear the elevator by .75". The manual says you can file down the rudder stops if you don't have enough throw, but isn't very helpful about what to do if you have too much throw. My initial setup had the rudder clearing the elevator by 1/8" or less. I adjusted the rod ends multiple times to improve the clearance. Each adjustment required removing the rudder to get access to the rod ends. Initially I thought I had to move the rod ends out to make more clearance but it kept getting worse. I finally discovered I could limit the throw by moving the rudder closer to the v-stab. Not intuitive, but after looking at the geometry it made sense.

Here is the rudder horn against the stop on the fuselage after adjusting the rod ends in a couple turns. No filing was required. 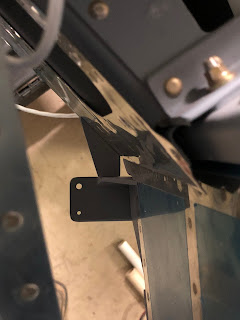 3/4"+ clearance between rudder at the stops and the elevator. 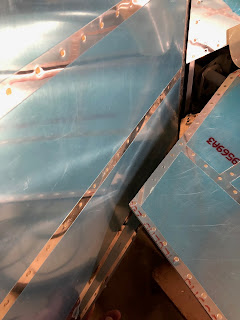