I spent a lot of time working out how to install the pump and plumbing for the smoke tank. I had several goals:

1) I would like the smoke system to be removable to free space and weight when touring.
2) The pump should be out of the way and not interfere with normal baggage loading.
3) The plumbing should be as simple as possible and not incumber access to (already) installed wiring, pitot/static lines and control links.
4) The flow control valve needs to be pilot accessible but out of the way.

The most direct route for the oil line is down the central wiring tunnel, but the tunnel is already pretty filled up with wiring. After much head scratching I decided to run the rubber hose under the pilot seat and along the lower longeron to the firewall. The easiest place to put the pump then became the area behind the pilot seat.

Here is a cardboard mockup of a mounting bracket I tried out: 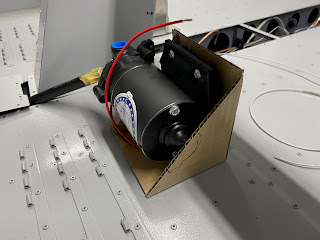 In the end I decided it would be easier to add some nut plates and bolt the pump directly to the cabin floor. The rear 2 bolts tie into a sub floor bulkhead and the forward 2 bolts are in the middle of a floor section. Hopefully they will provide enough structural support. 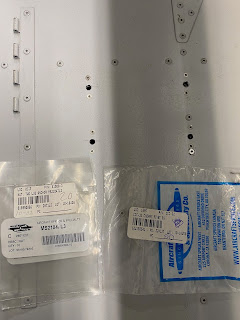 The pump bolts in place with just 4 bolts and nut plates so it should be easy to remove. It fits nicely behind the seat and is off of the main baggage floor. 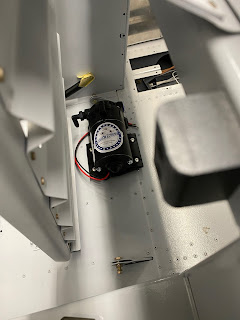