I cut the wing j-channel pieces to length and prepared to match drill them using the holes in the flange of the spars.

The manual suggests blocking the spars so they are level on the table before clamping the j-channel pieces onto the spar flange. I started blocking and discovered that the spars come with a little camber built into the section where the heavy spar caps are riveted to the spar web. I laid the spars back to back and blocked the bottom spar. You can see about an eight of an inch gap between the two spars. I could squeeze them together without too much force, so I am assuming when the wing skins and leading edge components are clecoed on the spars will straighten out. 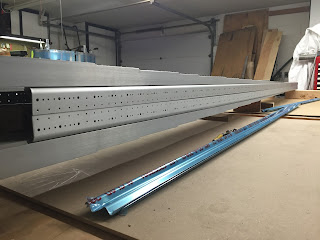 I laid out the two spars on the table and clamped them in place to hold them flat. They still aren't totally flat so I decided to knock off for the night. 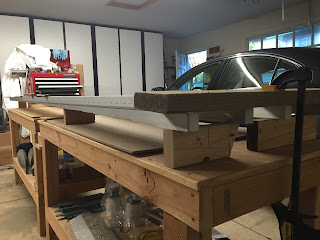