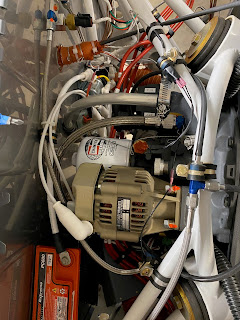 As the above photo shows, between the breather tube, oil cooler line and backup alternator the oil filter is pretty much boxed in and not easily accessible. I do plan to make regular oil changes so it will be important to be able to easily change the oil filter.

I've done some research and there are two solutions, the AirWolf remote oil filter or the B&C oil filter adapter. I installed an AirWolf on my Mooney and really liked it. It made changing the oil filter a breeze. Unfortunately, I couldn't find enough room on the RV14 firewall to easily install one so I decided to install the B&C oil filter adapter. After talking to tech support at B&C, I learned that the RV14 installation does not require any spacer plates, so I ordered just the oil filter adapter. The kit provided by B&C includes the adaptor, replacement gasket, crush ring for the temp probe, new washer for the vernatherm, new bolts and lock washers for installation and even a little dab of Locktite gasket sealer. Very complete kit.

Today I pulled the oil filter and the existing Lycoming oil filter adapter off of the engine. To reach the nuts and bolts holding on the adapter I had to first pull off the pmags. I also discovered that the oil cooler line would be in the way so I replaced the straight AN fitting with a 45 degree fitting to route the oil line around the B&C adapter. I also removed the existing oil breather tube as that will also be in the way. 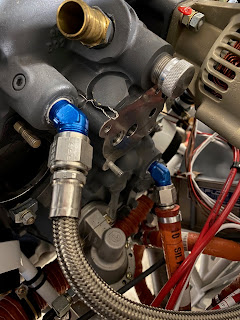 I've now discovered that it will be impossible to reach the lower right bolt for installing the B&C oil adapter because the backup alternator is in the way. I really did not want to remove the alternator because the lower left nut that holds it on was just about impossible to install. But it is what it is :-(
Posted by Smash at 5:39 PM